Making inferences is a skill by which students are often evaluated on state reading tests.  Additionally, according to Bloom's Taxonomy, analyzing implications is a higher order reading skill than comprehending text.  Therefore, good readers make inferences.  To make an inference, a reader or listener takes information provided by the writer or speaker, combines it with background knowledge and prior information relevant to the situation, and extracts an unstated or implied idea from the communication. 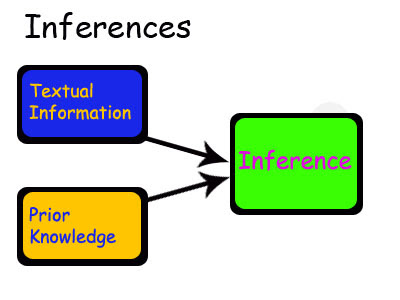 Inferences are related to implications; in fact, they are the same thing.  The difference is relative to the position of the agent.  Speakers or writers may imply an idea, either consciously or subconsciously.  When an idea is implied, it is expressed without being explicitly stated.  If the listener or reader understands this unstated idea, he or she makes an inference or infers the idea.  For example, person A might ask person B for a ride home. If person B does not feel like transporting person A, person B might respond with the following statement, "My car is pretty crowded."  Though person B never clearly says, "No, I won't give you a ride, person A," this is the implied message.  If person A does not make this inference, person A might insist that he or she can fit in the trunk or sit on someone's lap, whereas person A will have to be more explicit.  When a communication barrier cannot be crossed, there is said to be a gap in understanding. 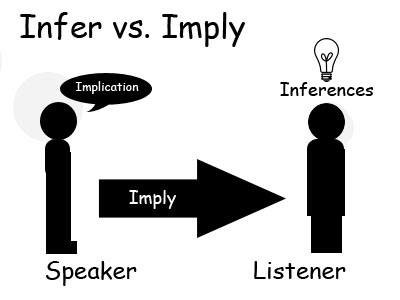 The area between what is clearly stated and what is understood is much contended.  Whether in courts of law, classrooms, or casual conversations, implied messages are not always understood and inferred messages are often unintended or faulty.  Inferences are not always objective: they are subject to the reader or listeners beliefs and preconceptions, but they must be based on evidence or else they are assumptions, not inferences. Often times multiple conclusion can be drawn, particularly if the writer or speaker is being intentionally vague or ambiguous.  But in such cases where multiple inferences can be supported, and the reader is expected to determine a correct response, the reader must identify the best or most likely explanation.  Such as in the following example:

Example Implication
Kevin nervously went to the locker room after practice.  Today was the last day of try-outs and he wasn't sure where he stood.  Kevin always tried his best, but he wasn't the fastest, or the best hitter, or capable of catching a fly ball.  Still though, he wanted to be on the team because his dad loved baseball and Kevin wanted to make him proud.  A crowd of guys was huddled around the team list and most were celebrating.  After they thinned out a bit, Kevin looked for his name.  Jimmy Swanson, Kevin's neighbor, was standing next to him.  Jimmy hollered out, "Yes!  Shortstop," and pranced away. Kevin lowered his head and walked away from the list.  Water welled in his eyes.  It would be a long walk home.

So, did Kevin make the team?  Well, the answer isn't clearly stated in the text.  While it is possible to support both conclusions, one is much more likely than the other.  Although one could argue that Kevin cried because he was so happy that he made the team, this ignores the text that explicitly states that Kevin can't catch the ball.  Also, based on prior knowledge one might deduce that time seems to move slower when things are not going well; therefore, since time is moving slower for Kevin, he did not make the team.  Although it is never clearly state, based on the information in the passage, it is more likely that Kevin did not make the team or at least that his name was not on the list. If you are looking for more practice, check out these inferences worksheets at ereadingworksheets.com.

Review
Making inferences is more difficult than understanding and locating information in a text, but it is something that good readers do.  To make an inference, use your background knowledge or prior information to draw logical conclusions based on textual details.  Though your inferences may not always be valid, by simply making inferences you open the dimensions of communication beyond the explicit.
Posted by Mr. Mortini at 2:47 PM